So far the draft Energy White Paper reads as though it has been hijacked by the Coal Seam Gas lobbyists. Suggesting we have to have CSG as a transitional power source into renewable energy & not to start using Solar Thermal until 2030 Page 40, even then only making up less than 10%. Instead suggesting Carbon Capture & Storage will make up 40%.  It would seem our Government has been bamboozled into thinking 40% of our energy needs will rely on CCS technology, in the hope it will be developed & working by 2050. Giving billions of $$$ to the fossil fuelers in this hope rather than spending the $$ on Solar Thermal, as the ‘smart money’ is in developing & developed Nations the world over. For example, check this video showing how North Africa will supply Solar powered energy to Europe.

Nur Energie is planning a solar project in Tunisia with a capacity of 2 Gigawatt, which should deliver electricity to Italy from 2016 via a submarine cable.

Dii has begun with the first Reference Projects which, for example, should start producing solar power from between 2014 and 2016 in Morocco. Exchange of technical expertise, market development issues and support of the development of renewable energy are the focus of it´s strategic partnerships with Morocco, Tunisia and Algeria.

As Solar Thermal power is being backed by such companies & Governments, our Government ought to have faith it can do the same rather than rely on fossil fuels & the fantasy or Carbon Capture Sequestation for our future energy needs. This link goes to the full Australian Draft Energy White Paper more.. 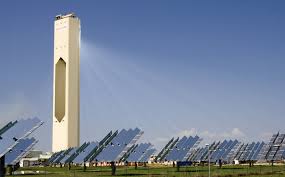